Skip to content
It seems that Debbie King has friends in high places.  What a shame that Michelle Nix apparently knows only what she has been told by Debbie.  Michelle’s statement of support on Facebook spurred some interesting comments.  Make some popcorn and read on.
Note that you will no longer find many of these comments  on Michele Nix’s Facebook page.  Apparently dissent is not tolerated there.   What follows is a verbatim copy and paste from Michele’s post and the comments thereon at a point in time.

If you think it’s wrong to make a target of someone, especially a woman, who volunteers their time, money, and name to our Party, then send a message you stand with Denny Debbie King of Haywood County. She’s been the constant victim of a vile smear campaign. Frankly, I’m disgusted by the tactics of Jeremy Davis, and others associated with the Haywood Republican Alliance who think it’s ok to treat a woman this way. SPEAK UP, SUPPORT DEBBIE and let her know you’ve got her back. #WomenSupportWomen #CallThemOut 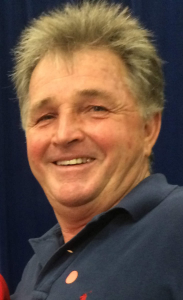 Really, Ken Henson?  Are you really that stupid?

We would never tell anyone what to think about someone.  We invite you to read further, listen to the audio, and judge for yourself.

Haywood County GOP Chairman Ken Henson called Jeremy Davis’ cell phone, and left the message that can be heard below.

We wonder why, if you intend to threaten someone, you would do it in a recorded message.  It doesn’t seem very wise. 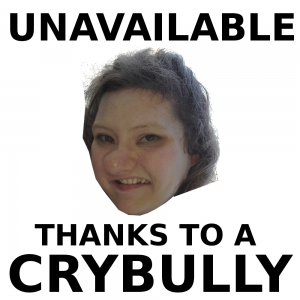 Haywood County Republican Party Chairman Ken Henson, at the HCGOP meeting on Tuesday March 28, declared the meeting to be private, and that recording would not be allowed.

“Monroe, are you recording? This is not a public meeting”, Henson said.

“I am recording it”, replied Monroe Miller.

“Well this is not a public meeting”, continued Henson, who then said something that isn’t quite intelligible on the recording.

A motion was made to disallow recording during the meeting, which was seconded by several.

During discussion, one attendee pointed out:  “If we have nothing to hide, what does it matter?”.  Apparently there are some honest folks left at HCGOP.

Later in the discussion, Henson contradicted his earlier claim saying: “I mean, it’s open… we’re here…”, and then continued: “We just don’t…. you know…  a lot of people don’t want it out on the Internet tonight.”

Chairman Henson, why don’t you want it on the Internet tonight?  What do you have to hide?

Ted Carr, apparently clarifying his motion, said: “The main point is that anyone who wants to participate could be here at the meeting, and it is not the purpose to record it and put it out on the Internet”.

Apparently Mr. Carr has something to hide as well.

Well folks, there you have it.  Haywood County GOP wants to make sure that you only know what they want you to know about their meetings.

Click here to hear the audio from which the quotes above were transcribed.

A few days ago, we received an email inviting us to attend a rally in support of Congressman Mark Meadows.  What a great idea!  We just love Congressman Meadows, and know he has been taking some heat for standing on principle as we elected him to do. 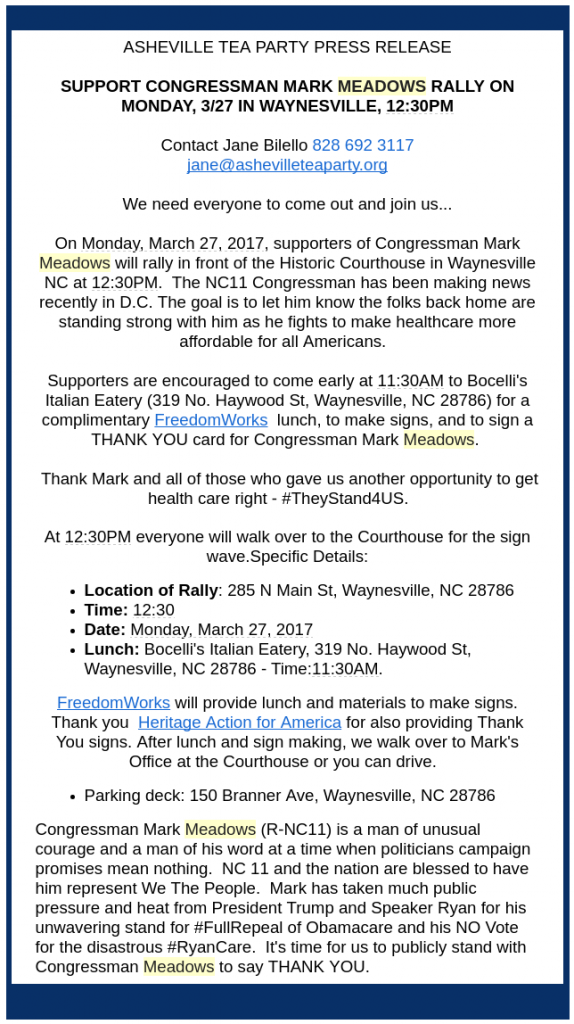 Imagine our surprise when we saw the following article in the online edition of our local newspaper.  Note that the image is a facsimile of the actual article, which has been changed. 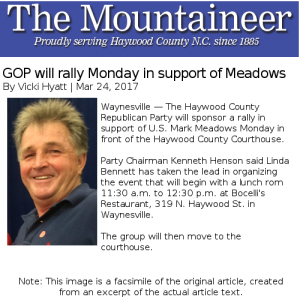 Hmmm…  sure looks like someone is trying to take credit for the work done by Jane Bilello, FreedomWorks, and Heritage Action for America.

Someone noticed the misattribution, and another article appeared: 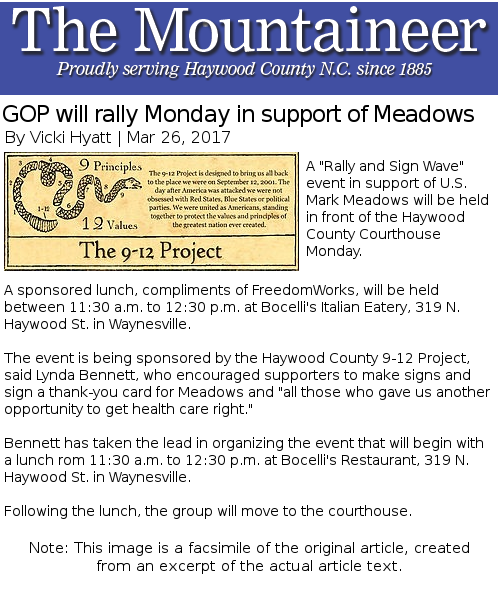 So now we have credit being given to Haywood County 9-12 Project.  Who are they?  They did at least credit FreedomWorks for buying lunch.  Apparently someone noted the fact that article was still far from accurate, and yet another version appeared: 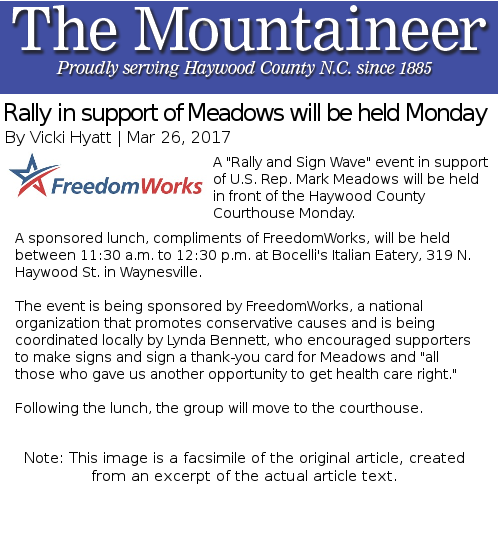 Finally, they got it right.  What took so long?

There seem to be two most likely causes of this:

1.  The reporter is not very good at her job.

2. The reporter was given false information.

The reporter who authored these stories has worked in Haywood County for quite some time.  We feel she wouldn’t be here if she was that incompetent.