Haywood County REALTOR® Bruce McGovern went on someone else’s page on Facebook to insult President Trump.  When politely asked to do so, Mr. McGovern declined to back his assertions with facts.

Did Mr. McGovern make allegations that he refused to substantiate?  We leave that to the reader to decide.  It all starts with a Facebook post by Paul Yeager, who has shared the following screenshots with us.

Note that Mr. Yeager’s post had nothing to do with President Trump. 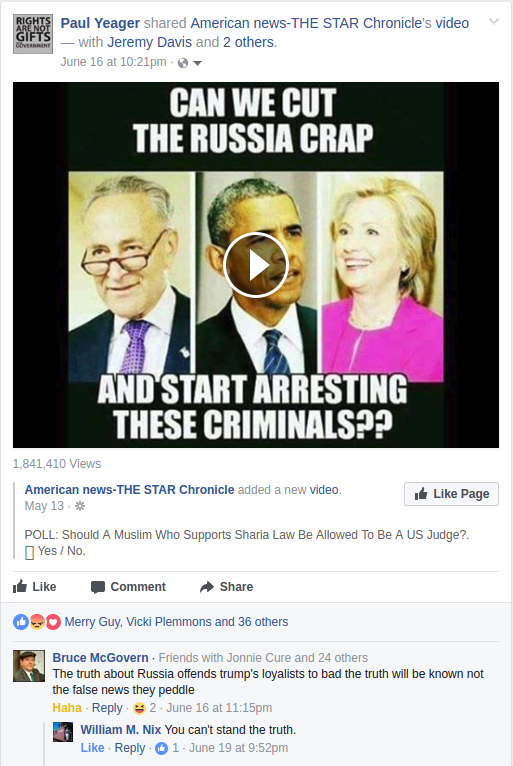 Mr. Yeager and some of his friends took exception to this, and asked Mr. McGovern to substantiate his claim, as seen below. 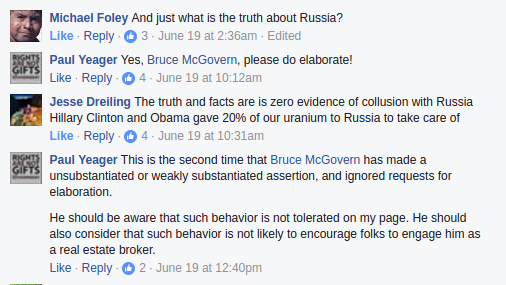 Mr. McGovern had a curious reply:

So, Mr.McGovern thinks Trump is guilty because “There is an investigation”, and further alleges that Mr. Yeager is a REALTOR®.  We have it on good authority that Mr. Yeager has not held an active real estate license for at least 7 years.  We would think that McGovern might have noticed that Yeager wasn’t showing up at meetings of the local Board of REALTORS®.

Then we have what looks quite a bit like an invitation to physical violence. 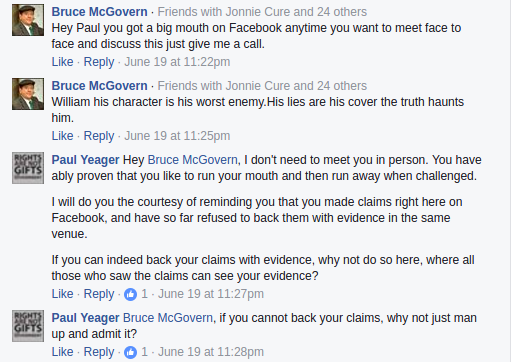 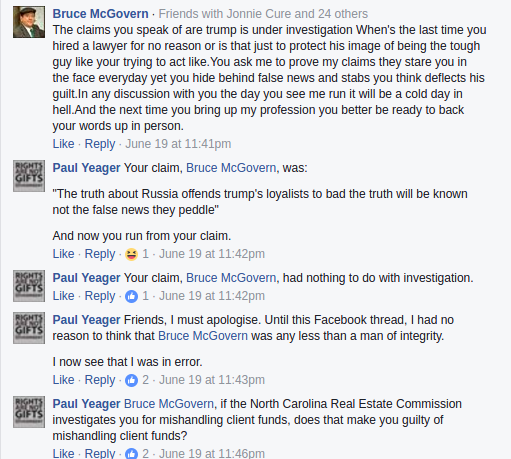 The screenshot above ends with a question from Yeager, which was never acknowledged by McGovern, let alone answered.  It seems a fair question to us.  It also seems quite clear from the exchange so far than McGovern thinks that President Trump must be guilty of something, because there is an investigation.  We deduce from this that Mr. McGovern does therefore not believe in the right to due process.

McGovern is not done yet. 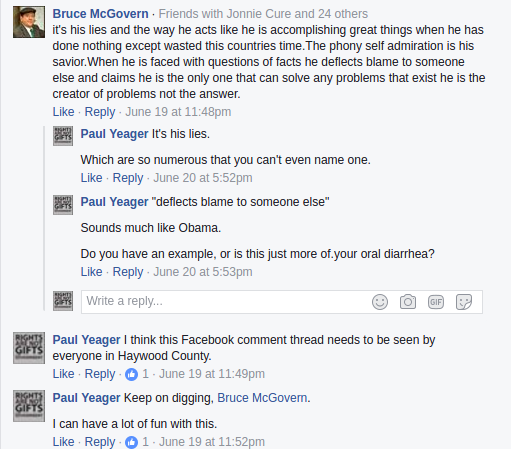 It seems that at this point, McGovern has crossed a line with Yeager.  We can’t blame him.  McGovern talks about lies, but has yet to mention one.

Not to be dissuaded, McGovern continues. 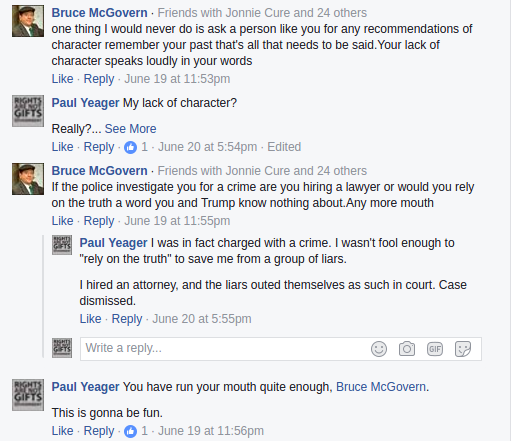 Yeager reports that he is puzzled by the claim that the original post (shown at the beginning of this post) reflects poorly on his character, and also on the apparent claim that hiring an attorney is a sign of guilt. 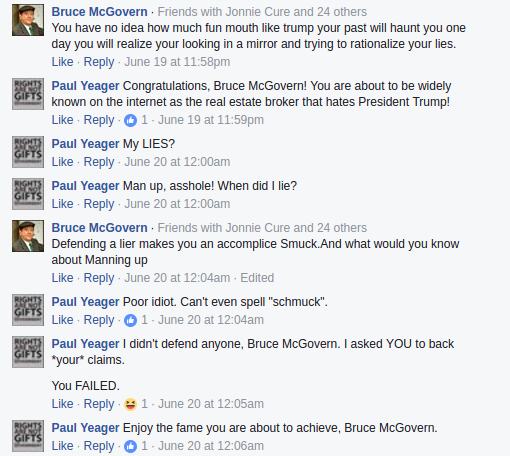 Now McGovern has alleged that Yeager lied, without actually explaining how.  He also illustrates his poor spelling.

We also wonder what “You have no idea how much fun mouth” means.

Now one might thank that at this point, one might know it was time to quit.  McGovern didn’t, which makes us wonder if he wasn’t at this point guilty of FUI (Facebooking Under the Influence). 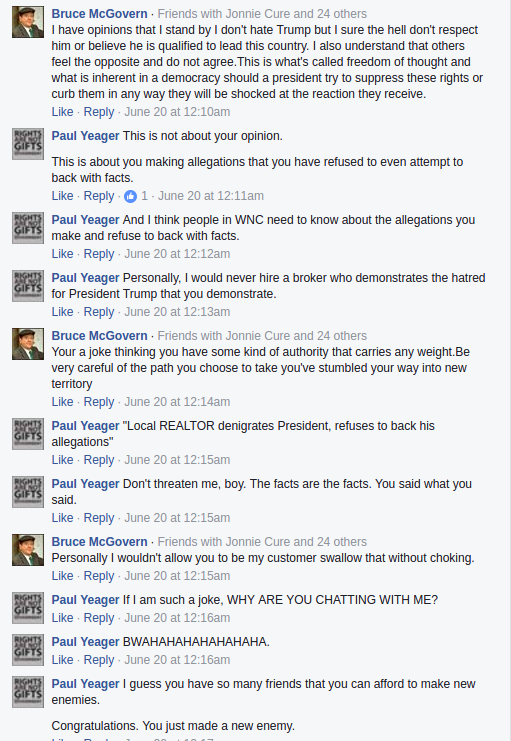 It certainly does appaear that McGovern threated Yeager once again in the screenshot above.

Yeager reports that he is just broken hearted that McGovern wouldn’t allow him to be his customer.  We are happy to hear that the real estate business in Haywood County is doing so well that Mr. McGovern can pick and choose clients based on their political beliefs.

We wonder if people looking for a REALTOR® might not do just the same thing.  After all, if you like our President, would you want to give thousands of dollars to someone who so obviously despises him?

One final note:  One can observe from the timestamps in the screenshots above and below that Bruce McGovern was given plenty of time to sober up and apologize.  Mr. Yeager reports no contact with McGovern since this Facebook exchange.

In the interest of full disclosure, here are all of the screenshots of the exchange that were provided to us, so no one can claim that things were selectively edited. CAUTION!  The following screenshots contain adult language. 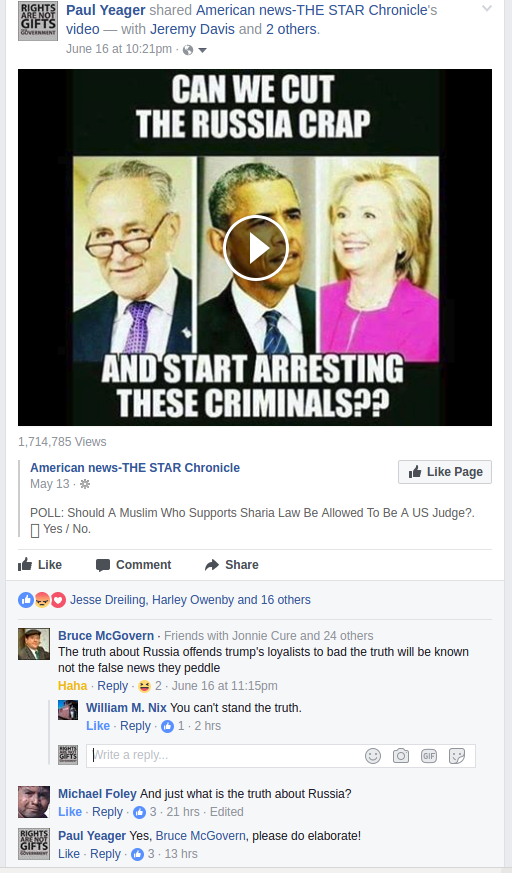 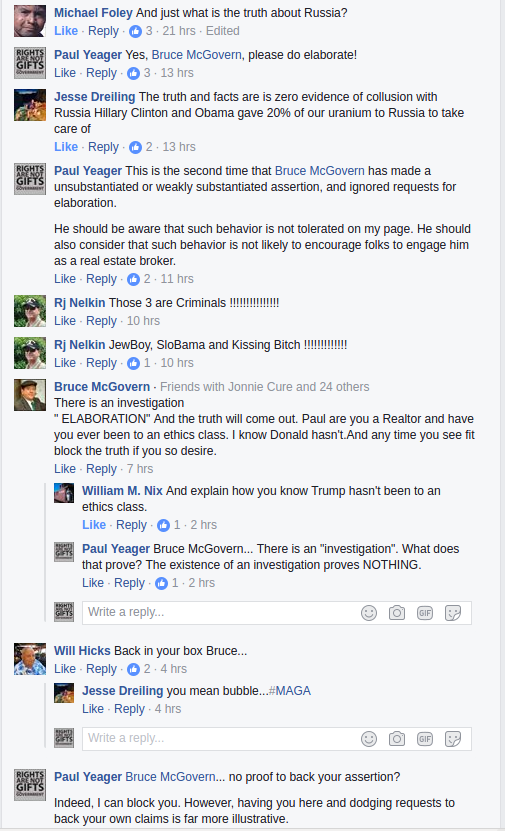 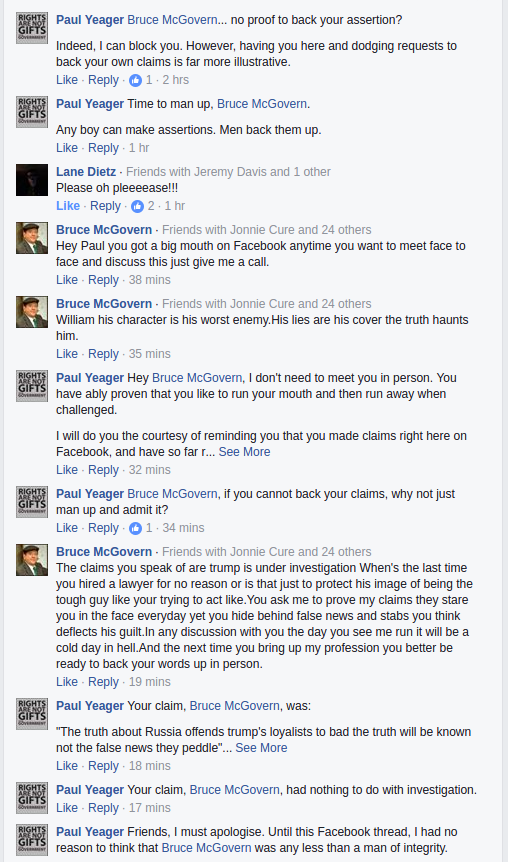 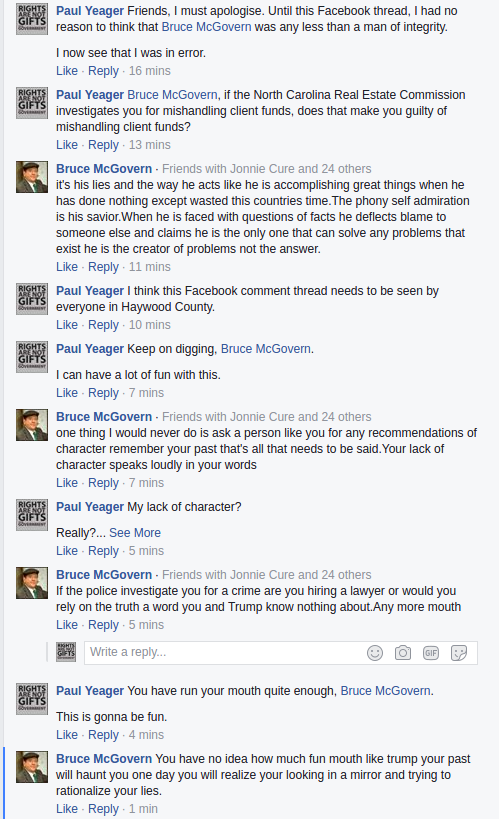 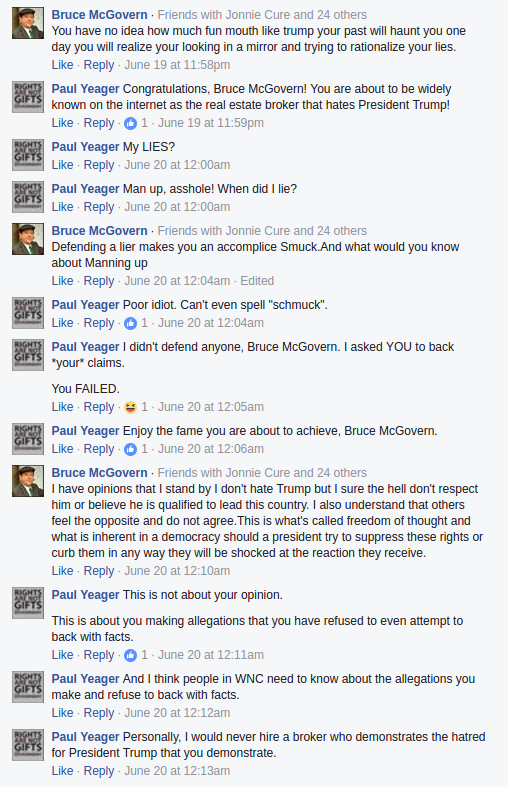 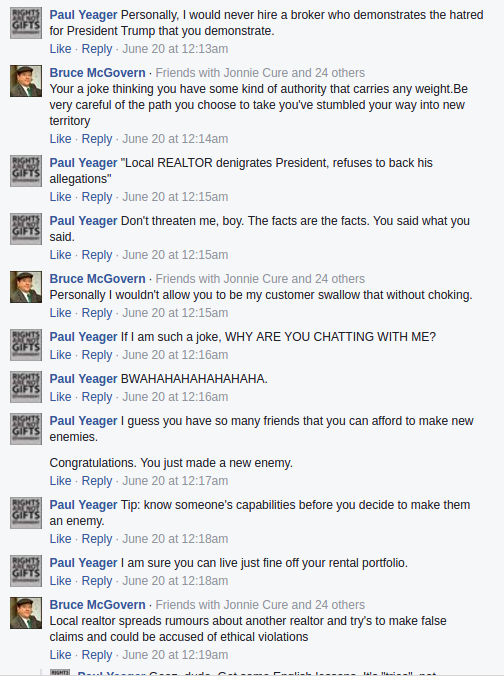 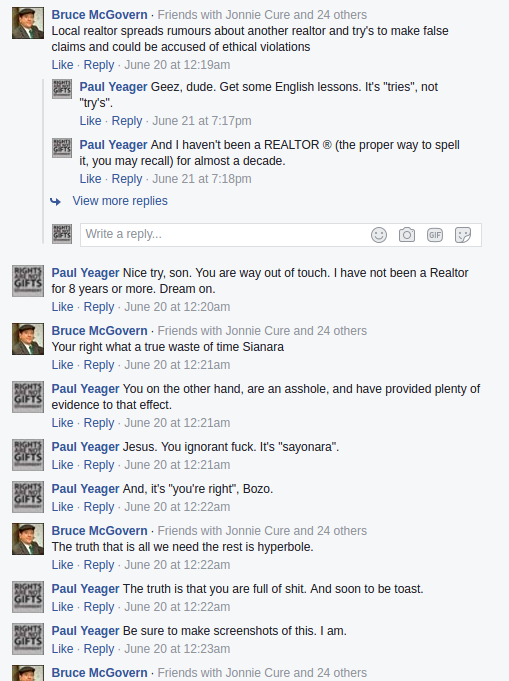 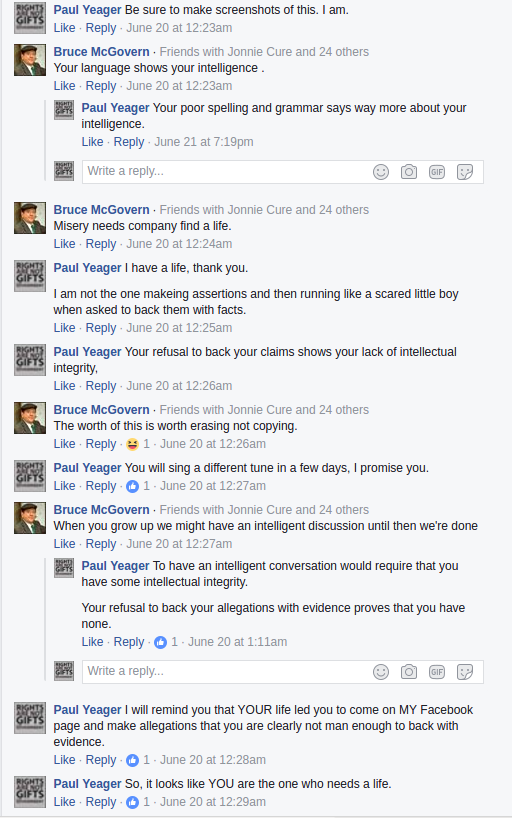