You can’t claim the moral high ground while lying.

Michele Nix has been caught at it more than once. Her recent support of parties in HCGOP leadership and her laughable claims regarding Haywood Republican Alliance prompted us to do some digging.

Our sources have delivered evidence of one clear case of lying outright on Ms. Nix’s part. 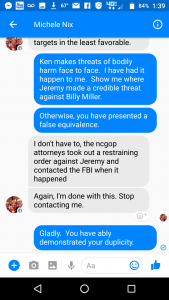 We can see above two claims being made:

Let’s take the second claim first – they contacted the FBI.  Anyone can call the FBI.  What does that prove?  Nothing.

Now for the first claim – NCGOP took out a restraining order against Jeremy Davis.

A restraining order is a document that is issued and signed by a judge.  The party being restrained is then served a with copy.

Jeremy Davis reports that he was never served with a restraining order, nor has he even seen an order with a judge’s signature.

NCGOP’s hired gun Tom Stark did send Jeremy a letter of warning and told him he was not welcome at the 2016 NCGOP Convention.   That is not a restraining order.

Does the second in command of NCGOP not have an obligation to speak honestly and accurately?